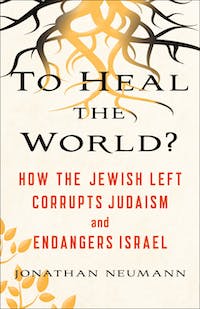 What is tikkun olam? This obscure Hebrew phrase means literally “healing the world,” and according to Jonathan Neumann, it is the master concept that rests at the core of Jewish left wing activism and its agenda of transformative change. Believers in this notion claim that the Bible asks for more than piety and moral behavior; Jews must also endeavor to make the world a better place.

In a remarkably short time, this seemingly benign and wholesome notion has permeated Jewish teaching, preaching, scholarship and political engagement. There is no corner of modern Jewish life that has not been touched by it. This idea has led to overwhelming Jewish participation in the social justice movement, as such actions are believed to be biblically mandated.

There's only one problem: the Bible says no such thing.

In this lively theological polemic, Neumann shows how tikkun olam, an invention of the Jewish left, has diluted millennia of Jewish practice and belief into a vague feel-good religion of social justice. Neumann uses religious and political history to debunk this pernicious idea, and shows how the Bible was twisted by Jewish liberals to support a radical left-wing agenda.

Neumann explains how the Jewish Renewal movement aligned itself with the New Left of the 1960s, and redirected the perspective of the Jewish community toward liberalism and social justice. He exposes the key figures responsible for this effort, shows that it lacks any real biblical basis, and outlines the debilitating effect it has had on Judaism itself.


On the second night of Passover in April 2009, several White House staffers gathered in the Old Family Dining Room for Seder night, the Jewish ceremonial dinner that takes place on the first two evenings of the festival....

Jonathan Neumann is a graduate of Cambridge University and the London School of Economics. He has written for various American, British, and Israeli publications, was the Tikvah Fellow at Commentary magazine, and has served as assistant editor at Jewish Ideas Daily. He is the author of To Heal the World?

Read the author at Commentary Magazine