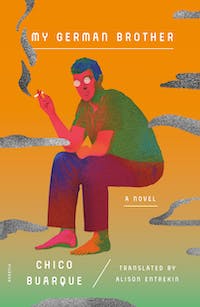 My German Brother is the renowned Brazilian musician and author Chico Buarque’s attempt to reconstruct through fiction his obsessive lifelong search for a lost sibling.

In 1960s São Paulo, the teenage car thief and budding lothario Ciccio comes home each day to a house stuffed with books. His father, a journalist and scholar, has spent his life acquiring them; his mother, by necessity, has spent her life organizing this library. Ciccio feels like an afterthought in his own family, largely left to his own criminal devices. Forbidden to touch any of these books, Ciccio sneaks off with The Golden Bough one day to discover a decades-old letter hidden inside. The letter reveals an illicit affair his father carried on while posted in Nazi-era Berlin, an affair that resulted in the birth of a baby boy. The child, along with his mother, vanished into the chaos of the Second World War. Ciccio develops a fascination for his mysterious German brother: a fixation that becomes a mission, both comical and courageous, pursued over decades, through dead ends and embarrassments and cases of mistaken identity.

"This translated work by the Brazilian writer and musician Buarque fictionalizes his lifelong pursuit of a lost sibling . . . The discovery sets off a comical, decades long journey in search of the truth about his brother."—The New York Times

"The language of My German Brother is musical and serpentine, as he unravels a tale that is part historical mystery, part intellectual and sexual coming-of-age."—Vanity Fair

"[A] rich and inventive new novel . . . My German Brother concludes—extremely satisfyingly, I’ll note—as a radical affirmation of fiction’s real knack for sticking in our heads and then spinning them around."—Music & Literature

"Acclaimed Brazilian novelist and musician Chico Buarque was driven by the desire to find out what happened to his own German half-brother—whether he survived the war in a bomb-ravaged Berlin, whether he had joined the ranks of the Hitler Youth. This impactful novel combines his quest for the truth with a riveting fictional story."—Book Riot

Chico Buarque; Translated from the Portuguese by Alison Entrekin

Chico Buarque was born in Rio de Janeiro, Brazil, in 1944. He is a legendary singer and songwriter, as well as the author of novels, plays, and screenplays. His books include Spilt Milk and Budapest.

Alison Entrekin is an Australian literary translator working from Portuguese. Among her numerous translations are Clarice Lispector’s Near to the Wild Heart and Chico Buarque’s Budapest.