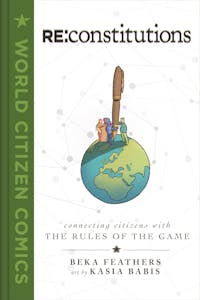 Marcus is stumped by a summer assignment: to write an essay on what it means to be a citizen. He’s surprised to hear from people in his community that constitutions play an important role when it comes to citizenship—they can even affect whether you feel like you belong in your country or not. From a Kosovo Albanian neighbor to a Rwandan exchange student, and even in his own family history, Marcus discovers stories of how constitutions—including the U.S. Constitution—shape the political landscape and our daily lives.

From Beka Feathers, an expert in post-conflict institution building, and Kasia Babis, an accomplished political cartoonist, comes a graphic novel that gives context to the modern issues that arise from constitutions. With historical examples from all over the world, Re: Constitutions examines how this essential document defines a nation’s identity and the rights of its citizens.

Beka Feathers is an expert in political development in conflict-affected states. She has worked with clients and partners in more than a dozen countries to draft constitutions, design transitional governments, facilitate peace processes, and advocate for improved access to justice. She lives with her talented, pun-loving wife and a suspiciously intelligent dog in Portland, Oregon.

Kasia Babis is a Polish cartoonist, illustrator, and political activist with an online following of over 100,000 fans. Her viral comics succinctly skewer social issues ranging from racism to street harassment from a distinctly feminist perspective.