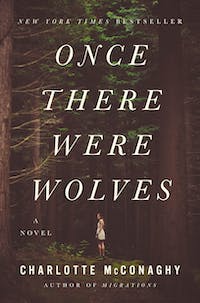 Inti Flynn arrives in Scotland with her twin sister, Aggie, to lead a team of biologists tasked with reintroducing fourteen gray wolves into the remote Highlands. She hopes to heal not only the dying landscape, but Aggie, too, unmade by the terrible secrets that drove the sisters out of Alaska.

Inti is not the woman she once was, either, changed by the harm she’s witnessed—inflicted by humans on both the wild and each other. Yet as the wolves surprise everyone by thriving, Inti begins to let her guard down, even opening herself up to the possibility of love. But when a farmer is found dead, Inti knows where the town will lay blame. Unable to accept her wolves could be responsible, Inti makes a reckless decision to protect them. But if the wolves didn’t make the kill, then who did? And what will Inti do when the man she is falling for seems to be the prime suspect?

Propulsive and spell-binding, Charlotte McConaghy's Once There Were Wolves is the unforgettable story of a woman desperate to save the creatures she loves—if she isn’t consumed by a wild that was once her refuge.

“Blazing . . . Visceral . . . As McConaghy shows in this stunning book, the limits of language lead us to the limits of empathy.”—Los Angeles Times

“Suspenseful and poignant . . . [Inti’s] story unfolds as a meditation on the social and scientific consequences of influencing ecosystems, while reminding us that humans and animals alike can break our hearts.”—Scientific American

“Spellbinding . . . Charlotte McConaghy has once again created a world where we must balance trust and fear, humanity and nature.”—Washington Independent Review of Books

“Gripping and often very moving . . . Despite the darkness and pain at the heart of McConaghy’s novel, it is not a bleak book. Instead, it bears within it an argument about the possibility of change. Recognizing the presence of other ways of being, of other minds and presences enlarges us, affording us a glimpse of the unknowable.”—The Sydney Morning Herald

“A stunning amalgam of environmental fiction and a deep exploration of personal relationships . . . An exceptional book that captures the soul and breaks the heart, only to put it back together again.”—Newsweek

“The Australian author made waves with last summer's Migrations, a meditation on climate change and loneliness, and returns with a new story set in the Scottish Highlands, where two twin sisters join a team attempting to reintroduce a pack of wolves to their natural surroundings.”—Entertainment Weekly

“Lyrical, captivating, thought-provoking and thrilling, this immersive read will capture your attention from the first page.”—Good Morning America

“A lyrical novel with a wild heart.”—PopSugar

“Urges us to take a lesson from the wolves, and learn to lean on one another.”—BookRiot

“Far more than an old wolves’ tale. Instead, it illustrates what it’s like to be an outsider—from both a human and animal perspective—and the level of healing and acceptance it takes from within to be accepted and to accept yourself.”—Electric Literature

“This poetic and atmospheric novel is a mystery, a celebration of wolves, and a tribute to those who work to rewild our landscapes.”—EcoLit Books

“Intense, emotional and rich with beautifully rendered prose, McConaghy’s novel is a powerful meditation on humanity, nature and the often frightening animalistic impulses lurking within us all . . . Another triumph for a rising fiction star, offering an intensely realized world for readers to get lost in.”—BookPage (starred review)

“McConaghy excels at conveying the sensuous experience of nature and the emotions it provokes: wonder at its majesty, sorrow at its destruction. Unflinching in its view of the harm humans inflict on the environment and on each other—and insisting on the interconnectedness of the two—Once There Were Wolves delivers a powerful call for hope in the face of catastrophe.”—Shelf Awareness

"One of those very rare, special novels that changes you as you read, which you do as slowly as you can because you want to savor it, except the pages keep turning furiously because the story is so thrilling and so powerful, with some of the best characters I have ever read. Charlotte McConaghy has cemented herself as a sure-thing, must-read writer for me."—Laurie Frankel, The New York Times bestselling author of This Is How It Always Is

"So damn good. A page-turner that makes you think and has a huge emotional impact."—Jeff VanderMeer, The New York Times bestselling author of Annihilation

“Poetic . . . A lovely, gripping tale about a world that could be our own.”—Kirkus Reviews (starred review)

“McConaghy infuses Inti’s adventures with ravishing descriptions of the landscape and the ‘infinite mysteries of wolves’ . . . McConaghy's richly plotted tale of suspense and psychological insight poses provocative questions about predators and humanity's impact on Earth.”—Booklist


When we were eight, Dad cut me open from throat to stomach.

In a forest in the wilds of British Columbia sat his workshop, dusty and reeking of blood. He had skins hanging to dry and they brushed our foreheads as we crept...

Charlotte McConaghy is the New York Times bestselling author of Once There Were Wolves and Migrations, which are being translated into more than twenty languages. She is based in Sydney, Australia.