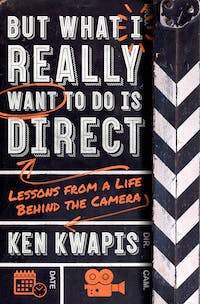 He is among the most respected directors in show business, but getting there wasn’t easy. He struggled just like everyone else. With each triumph came the occasional face-plant. Using his background and inside knowledge, But What I Really Want To Do is Direct tackles Hollywood myths through Ken’s highly entertaining experiences. It’s a rollercoaster ride fueled by brawls with the top brass, clashes over budgets, and the passion that makes it all worthwhile.

This humorous and refreshingly personal memoir is filled with inspiring instruction, behind-the-scenes hilarity, and unabashed joy. It’s a celebration of the director’s craft, and what it takes to succeed in show business on your own terms.

"Ken Kwapis's But What I Really Want to Do is Direct offers thoughtful and thought-provoking meditations on directing for film and television. Kwapis's insights were born from his influential work in the media industry, but they apply to many other fields of endeavor. Anyone who has done creative work—whether professionally or just for their own satisfaction—will draw inspiration from Kwapis's framing of his own creative experiences."—University of Alabama Professor Emeritus Dr. Jeremy Butler

"Ken Kwapis’ But What I Really Want To Do Is Direct is a must read. Using specific personal examples, Ken clarifies the role of the director. He provides information and inspiration for both students and professionals, providing both populations with tools to translate the script through their individual voices. If you want to be a director, read this book."—James Gardner, Director of Television Studies, Dodge College of Film and Media Studies, Chapman University

"It was an honor and a delight to host a master class with Ken Kwapis for the Columbia University graduate film program. It's great for the students to hear from a director who has a real depth of experience in both television and film—let alone someone like Ken, who spoke with candor and insight about his career, and has hilarious stories to tell. On top of that, Ken has just written an essential book about the craft of directing (But What I Really Want to Do is Direct), and has given a lot of thought to the process. I know Ken's session was a highlight of the semester for the students who attended."—Jack Lecher, Associate Professor of Professional Practice, Film

"In the past few months I feel like I’ve been able to get to know Ken Kwapis; not just as a director but as a person. We hosted him as a guest speaker and I’ve read his book. Ken’s approach celebrates the human experience as an essential part of any creative endeavor. He effortlessly balances theory, empathy, intuition, and pragmatism as pillars of his directorial work and interactions with students and faculty. His perspective is an elixir to anyone struggling with stress, doubt, or anxiety over ongoing projects."—Norbert Herber, Senior Lecturer & Unit Director, Media Arts & Production, The Media School at Indiana University, Bloomington

"I have been so fortunate to work with Ken Kwapis . . . directing our shows, to pitching and development and now, as a teacher. Ken came to my class to guest lecture about his amazing career and he has such wonderful insight with such depth and breadth of knowledge. He and his book are a real treasure."—Maggie Murphy, Associate Professor at Loyola Marymount University's School of Film and Television

"Ken Kwapis always brought out the best in the actors on The Office. Whenever Ken was directing, I always felt safe to go out on a limb and take chances, knowing he had my back. Every aspiring director should read this book."—Jenna Fischer

"A vital, magnificent manifesto on the art and craft of directing, written with emotional, instinctual and intellectual depth by one of America's most beloved film and television directors."—Amber Tamblyn

"In the years that I was fortunate to work with Ken on Malcolm in the Middle, he had an uncanny ability to guide actors right to the heart of a scene and reveal its truths. He admits that he doesn’t have all the answers, he’ll make mistakes, and at times he’ll struggle, but as he says in the book, 'It’s the struggle to get it right that makes us human.'"—Bryan Cranston

“'Action!' is what most directors bark out to begin a scene. But Ken Kwapis starts by gently intoning the words 'Go ahead . . . ' That simple suggestion assures everyone they’re in smart, capable, humble hands. That’s how you’ll feel reading this book. And so, if you’re anxious to discover how a top director always brings humor, honesty, and humanity to his work, all I can tell you is . . . 'Go ahead.'"—Larry Wilmore

"An entertaining and informative guide for film buffs and filmmakers."—Kirkus Reviews

"[Kwapis'] illuminating memoir will appeal to both film and TV buffs and aspiring directors."—Booklist

"An enjoyable memoir that offers lessons of filmmaking, what counts as success in Hollywood, and the magic of film."—Library Journal


I was bitten by the filmmaking bug when I was ten years old. My parents graciously gave me a Super 8 camera, and I immediately tried to execute a tricky shot. Our house had a pool table in the basement, and I perched...

KEN KWAPIS is an award-winning director who has moved easily between the worlds of feature filmmaking and television directing. He has directed eleven feature films and helped launch seven television series, including NBC's The Office.