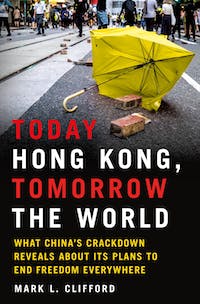 For 150 years as a British colony, Hong Kong was a beacon of prosperity where people, money, and technology flowed freely, and residents enjoyed many civil liberties. In preparation for handing the territory over to China in 1997, Deng Xiaoping promised that it would remain highly autonomous for fifty years. An international treaty established a Special Administrative Region (SAR) with a far freer political system than that of Communist China—one with its own currency and government administration, a common-law legal system, and freedoms of press, speech, and religion.

But as the halfway mark of the SAR’s lifespan approaches in 2022, it is clear that China has not kept its word. Universal suffrage and free elections have not been instituted, harassment and brutality have become normalized, and activists are being jailed en masse. To make matters worse, a national security law that further crimps Hong Kong’s freedoms has recently been decreed in Beijing. This tragic backslide has dire worldwide implications—as China continues to expand its global influence, Hong Kong serves as a chilling preview of how dissenters could be treated in regions that fall under the emerging superpower’s control.

Today Hong Kong, Tomorrow the World tells the complete story of how a city once famed for protests so peaceful that toddlers joined grandparents in millions-strong rallies became a place where police have fired more than 10,000 rounds of tear gas, rubber bullets and even live ammunition at their neighbors, while pro-government hooligans attack demonstrators in the streets. A Hong Kong resident from 1992 to 2021, author Mark L. Clifford has witnessed this transformation firsthand. As a celebrated publisher and journalist, he has unrivaled access to the full range of the city’s society, from student protestors and political prisoners to aristocrats and senior government officials. A powerful and dramatic mix of history and on-the-ground reporting, this book is the definitive account of one of the most important geopolitical standoffs of our time.

“Powerful, comprehensive and poignant, this book offers a truthful and balanced overview of events in Hong Kong over the past three decades or more. As someone who has lived and breathed much of what Mark Clifford writes, I identify with it and endorse it totally. If you want to understand Hong Kong, the Chinese Communist Party and the threat to freedom itself, you must make it a top priority to read this book.”—Benedict Rogers, co-founder and Chief Executive of Hong Kong Watch

“Gripping and powerfully-written, Clifford pulls in the reader through a vivid account of Hong Kong’s history and on-the-ground reporting on the students, business tycoons, and politicians central to this disturbing drama, that tells us much about the growing threat China’s top leaders pose to global freedoms. He taps into his deep experience running Hong Kong’s top English language newspaper, directing the business association representing the region’s most powerful companies, his close contacts with senior Hong Kong officials, and his crucial role as a director for Hong Kong’s once most independent media company, whose destruction is central to this modern tragedy. Clifford, who has spent most of his adult life in Hong Kong, is uniquely suited to tell this sad story . . . A must-read account on the ongoing destruction of Hong Kong and why it matters to the world.”—Dexter Roberts, author of The Myth of Chinese Capitalism

“Mark Clifford has written a riveting and passionate account of China’s attack on Hong Kong and its broader implications. Today Hong Kong, Tomorrow the World parts the curtains on what every informed citizen should know and be thinking about.”—Jeffrey E. Garten, Dean Emeritus, Yale School of Management

“The world has usually viewed Hong Kong as either a last gasp of eighteenth- and nineteenth-century European colonialism or, more recently, as a buzzing beehive of modern capitalism. Neither image captures the surprising phenomenon that Mark Clifford details in this masterly study. Hong Kong has now become a front line in the world-wide quest for human freedom. Pursuit of it has spouted like a geyser from Hong Kong wellsprings that are located neither in national pride nor in appetite for lucre but in human nature itself—in the desire to be master of one’s own life. The Communist Party of China’s repression of Hong Kong is both fierce and unscrupulous, and the world ignores this stand-off at its peril. As Vaclav Havel has taught us, an assault on human dignity anywhere is an assault on it everywhere.”—Perry Link, professor emeritus, East Asian Studies, Princeton University and author of An Anatomy of Chinese

“An agile observer and diligent journalist, Clifford leads us through Hong Kong’s fraught modern history in relation to the striving for democratic freedoms, and he reveals many stark consequences brought about by the suppression of its spirit. An intimate, eye-opening chronicle that should serve as an alarm to fragile democratic republics around the world.”—Kirkus Reviews

MARK L. CLIFFORD is president of the Committee for Freedom in Hong Kong, the former executive director of the Asia Business Council, and a former board member at Next Digital. He is editorial chair of the Asian Review of Books, and served as editor in chief of both English-language papers in Hong Kong, The Standard and the South China Morning Post. An honors history graduate of UC Berkeley and a Walter Bagehot Fellow at Columbia University, he holds a Ph.D. in Hong Kong history from the University of Hong Kong.