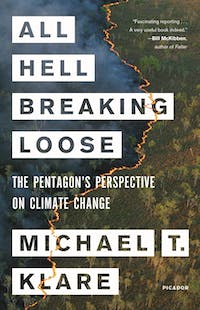 The Pentagon, unsentimental and politically conservative, might not seem likely to be worried about climate change—still linked, for many people, with polar bears and coral reefs. Yet of all the major institutions in American society, none take climate change as seriously as the U.S. military. Both as participants in climate-triggered conflicts abroad, and as first responders to hurricanes and other disasters on American soil, the armed services are already confronting the impacts of global warming. The military now regards climate change as one of the top threats to American national security—and is busy developing strategies to cope with it.

While others still debate the causes of global warming, the Pentagon is intensely focused on its effects. Its response makes it clear that where it counts, the immense impact of climate change is not in doubt.

“Klare has cleverly used the Pentagon’s continuing assessments of the impact of climate change . . . to illuminate not only the folly of denialism but also the seriousness of the potential climate threats.”—Foreign Affairs

“The book synthesizes the latest government papers, statements and presentations by officials, along with personal interviews, to give the most up-to-date perspective on climate as viewed through the lens of those tasked with defending America from threats of all types.”—Rolling Stone

“With an impressively global breadth of knowledge, Michael Klare shows us the various ways in which the Pentagon understands all the dimensions of climate change—and is planning to cope with it. After all, our armed forces are, among other things, a worldwide apparatus for intelligence-gathering and strategic planning. On this greatest issue of our times, we ignore their findings at our peril.”—Adam Hochschild, author of Lessons from a Dark Time and King Leopold’s Ghost

“After a lifetime of critical reporting on our war machine, Michael Klare has the contacts and insights to make this new book very useful indeed: it shows that inside the Pentagon people have begun to take climate change quite seriously, and helps us think about what might mean going forward.”—Bill McKibben, author of Falter: Has the Human Game Begun to Play Itself Out?

“Michael Klare has done a masterful job of capturing key points in the U.S. military’s pragmatic approach to climate change. As he shows, the military is building resilience in its own training, testing, and ability to respond, and is clear-eyed about warming’s effects in catalyzing chaos and crises abroad that it may be called upon to respond to.”—General Ron Keys, United States Air Force (retired), chairman of the CNA Military Advisory Board

“Michael Klare does an exemplary job of recounting not only how military leaders view climate change differently than politicians on either end of the political spectrum, but why they do so. Seamlessly weaving together a narrative of Pentagon reports and compelling testimony, he shows that the military sees climate change as a threat to its capacity to defend the nation.”—John Conger, former Principal Deputy Under Secretary of Defense (Comptroller)


Shortly after assuming the presidency in 2017, Donald Trump rescinded Executive Order 13653, “Preparing the United States for the Impacts of Climate Change,” a measure that had been signed by President Barack Obama...

Michael T. Klare is the author of over fifteen books, including Resource Wars and Rising Powers, Shrinking Planet. A contributor to Current History, Foreign Affairs, and the Los Angeles Times, he is the defense correspondent for The Nation and the director of the Five College Program in Peace and World Security Studies at Hampshire College in Amherst, Massachusetts.