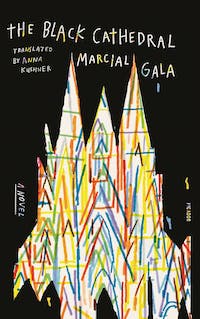 The Stuart family moves to a marginal neighborhood of Cienfuegos, a city on the southern coast of Cuba. Arturo Stuart, a charismatic, visionary preacher, discovers soon after arriving that God has given him a mission: to build a temple that surpasses any before seen in Cuba, and to make of Cienfuegos a new Jerusalem.

In a neighborhood that roils with passions and conflicts, at the foot of a cathedral that rises higher day by day, there grows a generation marked by violence, cruelty, and extreme selfishness. This generation will carry these traits beyond the borders of the neighborhood, the city, and the country, unable to escape the shadow of the unfinished cathedral.

Told by a chorus of narrators—including gossips, gangsters, a ghost, and a serial killer—who flirt, lie, argue, and finish one another’s stories, Marcial Gala's The Black Cathedral is a darkly comic indictment of modern Cuba, gritty and realistic but laced with magic. It is a portrait of what remains when dreams of utopia have withered away.

“Accidental cannibals, tenderhearted killers, angst-ridden ghosts and well-behaved artists soon populate [The Black Cathedral’s] topsy-turvy universe . . . Even as the novel charts the voyages of its vagabonds, it represents an attempt to draw the periphery into the center, steering us toward the provinces as it renovates the Cuban novel . . . Its narrators, more than a dozen in number, are usually granted a page at a time before other characters butt in, pick up the thread or offer their own spin on the same series of events. This chaotic, democratic bricolage—each voice vulgar and vulnerable in its own way—styles the novel as a series of interviews. Taken together, they represent a cubist inquest into the soul of Cienfuegos.”—Shaj Mathew, The New York Times

“In Gala’s many-voiced tale, Cienfuegos is a provincial capital harboring mundane material aspirations, ingrained racial divisions, and serious artistic longings in competition with religious urges . . . The Black Cathedral is finally not about larger ideas of redemption and the future at all, but about predictable paths of minor failure and major self-justification. It’s no accident that key events . . . happen during the early years of the Obama administration: there’s a pervasive sense of dashed hopes, business as usual, faith ignored or betrayed. That the disappointment in a black president is most persuasively expressed by a black murderer—this is just one of the novel’s more devious turns.”—Brian Dillon, 4Columns

"Marcial Garcia’s The Black Cathedral is told via a panoply of voices—all the better to narrate this expansive yet taut novel of faith, family, and violence. What begins as the story of a religious family moving to a small Cuban town gradually becomes broader in scope, encompassing obsession and murder along the way." —Vol. 1 Brooklyn

"A story of family, an account of a transforming Cuba, an exploration of religious devotion, and a harrowing tale of a sinister man engaged in horrific acts. The Black Cathedral might not be what you first expect, but its unpredictability serves as one of its many strengths."—Tobias Carroll, Literary Hub

"Marcial Gala´s magnificent The Black Cathedral is a chorus of unforgettable characters that linger in the ashes of Revolution and personal passions. This novel is the broken mirror in which modern Cuba is portrayed with unsettling humanity."—Eduardo Lalo, author of Uselessness

"Award-winning Cuban writer and architect Gala links the fate of a community with the doomed construction of a cathedral in this dark, violent, often comic novel . . . A raucous, anguished, fast-paced story, tautly written and deeply rooted."—Kirkus Reviews (starred review)

"For anyone who has nurtured the fantasy of Cuba as a tropical socialist paradise, that illusion is heartbreakingly shattered in this award-winning novel . . . Kushner’s nimble translation flows with flavor and intensity . . . Gala's raw, compelling, and highly readable novel lays bare a Cuba that, just like everywhere else, has not found an answer to human desperation, envy, or evil."—Sara Martinez, Booklist

"Strange, exuberant, and altogether brilliant . . . An enthralling work of imagination and grit, Gala’s novel captures the complexity of one neighborhood as much as it exemplifies the many pleasures of great fiction."—Publishers Weekly (starred review)


Besides David King and Samuel Prince, there was an older one, Mary Johannes, she was called, or still is, because she’s alive and things are going better for her than for us. They arrived...

Marcial Gala is a novelist, poet, and architect from Cuba. He won the Pinos Nuevos Prize for best short story in 1999. The Black Cathedral received the Critics' Award and the Alejo Carpentier Award in 2012 and was published in English translation by FSG in 2020. Gala also won the 2018 Ñ Prize of the City of Buenos Aires-Clarín for his novel Call Me Cassandra. He lives in Buenos Aires and Cienfuegos.

The daughter of Cuban exiles, Anna Kushner was born in Philadelphia and has been traveling to Cuba since 1999. She has translated the novels of Norberto Fuentes, Leonardo Padura, Guillermo Rosales, and Gonçalo M. Tavares, as well as two collections of non-fiction by Mario Vargas Llosa.