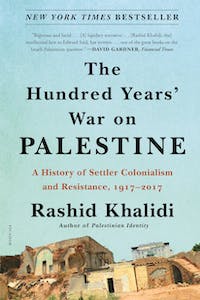 In 1899, Yusuf Diya al-Khalidi, mayor of Jerusalem, alarmed by the Zionist call to create a Jewish national home in Palestine, wrote a letter aimed at Theodore Herzl: the country had an indigenous people who would not easily accept their own displacement. He warned of the perils ahead, ending his note, “in the name of God, let Palestine be left alone.” Thus Rashid Khalidi, al-Khalidi’s great-great-nephew, begins this sweeping history, the first general account of the conflict told from an explicitly Palestinian perspective.

Drawing on a wealth of untapped archival materials and the reports of generations of family members—mayors, judges, scholars, diplomats, and journalists—The Hundred Years' War on Palestine upends accepted interpretations of the conflict, which tend, at best, to describe a tragic clash between two peoples with claims to the same territory. Instead, Khalidi traces a hundred years of colonial war on the Palestinians, waged first by the Zionist movement and then Israel, but backed by Britain and the United States, the great powers of the age. He highlights the key episodes in this colonial campaign, from the 1917 Balfour Declaration to the destruction of Palestine in 1948, from Israel’s 1982 invasion of Lebanon to the endless and futile peace process.

Original, authoritative, and important, The Hundred Years' War on Palestine is not a chronicle of victimization, nor does it whitewash the mistakes of Palestinian leaders or deny the emergence of national movements on both sides. In reevaluating the forces arrayed against the Palestinians, it offers an illuminating new view of a conflict that continues to this day.

"The Hundred Years’ War is one of the best-researched general surveys of 20th and early 21st century Palestinian life, but it’s also a deeply personal work . . . For a people whose history is all but criminalized, this act of retelling is itself a form of resistance."—The Nation

"Rigorous and lucid . . . Rashid Khalidi, the intellectual heir to Edward Said, has written one of the great books on the Israeli-Palestinian question."—Financial Times

"Informed and passionate . . . Khalidi's is an elegy for the Palestinians, for their dispossession, for their failure to resist conquest."—The Guardian

"This book’s undertaking is remarkable: renowned historian Khalidi captures over a century of history in strong, compelling prose, including that of his own family (his great-great-great-uncle was the mayor of Jerusalem in the late 19th-century). It is widely considered required reading for anyone truly wishing to understand Palestine."—Electric Literature

"This book is a masterful work of scholarship and personal history excavating unlike any I’ve seen before; this will become a major force in the Palestinian historical canon in the years to come."—Literary Hub

“Focused on the Palestinians’ lived experience of a century of war, never losing sight of the geo-political forces that fostered it, Rashid Khalidi has written a book of comprehensive scholarship with the delicacy and intensity of a novel.”—Ahdaf Soueif, author of The Map of Love

“With wisdom and insight, Rashid Khalidi lays to rest the illusions of Israelis and Palestinians alike. He combines brilliant scholarship with extensive first-hand experience of war and diplomacy in a call for mutual acceptance and equality of rights as the only way to end a century of conflict. An outstanding book.”—Eugene Rogan, author of The Arabs: A History

“A riveting and original work, the first to explore the century of war against the Palestinians on the basis of deep immersion in their struggle—a work enriched by solid scholarship, vivid personal experience, and acute appreciation of the concerns and aspirations of the contending parties in this deeply unequal conflict.”—Noam Chomsky, author of Failed States: The Abuse of Power and the Assault on Democracy

“Brave, brilliant, and magisterial, this outstanding work of historical scholarship is also full of high drama and fascinating narrative. Rashid Khalidi presents compelling evidence for a reevaluation of the conventional Western view of the subject in a book that is a milestone in the study of the Arab-Israeli conflict.”—Avi Shlaim, author of The Iron Wall: Israel and the Arab World

“This is the first true people’s history of the hundred-year struggle of the Palestinian people, a beautifully written text and a call for justice and self-determination.”—Roxanne Dunbar-Ortiz, author of An Indigenous Peoples’ History of the United States

“A meticulous account of Palestinian history that provides a brilliant framework for the study of settler colonialism on a global scale. You can disagree with Khalidi but you cannot afford to miss the opportunity of arguing with him.”—Homi K. Bhabha, author of The Location of Culture

“Through a scholarly narrative rooted in his own family history, Rashid Khalidi offers a fresh interpretation that shows Palestine as a violent, grinding fault in the shifting tectonic plates of Great Power politics. This book is sure to become a classic account.”—Elizabeth F. Thompson, author of Justice Interrupted: The Struggle for Constitutional Government in the Middle East

“This book is a remarkable interweaving of three distinctive strands: a deeply researched history of the struggle between Zionist aspirations and Palestinian resistance; an analytical framework that places the conflict within the context of settler colonialism; and a personal family history that brings the narrative alive. Newcomers and specialists alike will learn much from reading this sweeping account.”—William B. Quandt, author of Peace Process: American Diplomacy and the Arab-Israeli Conflict Since 1967

“Learned and clear-eyed, this compelling history of the long war to deny Palestinian rights exposes a century of blunders, misjudgments, and willful deceptions. Highly recommended.”—Stephen M. Walt, coauthor of The Israel Lobby

“Beautifully written and accessible, this book is an invaluable examination of the Palestinian-Zionist encounter as a struggle against settler-colonial domination, not as an issue of conflict resolution—a vital difference, necessary for a deeper understanding of the war and for its meaningful resolution. The Hundred Years’ War on Palestine illustrates, at its core, the refusal of Palestinians to accept their own defeat and their desire to live as equals with Israelis in a land they are destined to share.”—Sara Roy, author of Hamas and Civil Society in Gaza: Engaging the Islamist Social Sector

"As in any book about the Israeli-Palestinian conflict, there is ample room for debate and controversy. And as in any book by Rashid Khalidi, there is history, erudition, politics and passion aplenty. There is also his tenacious conviction that ‘there are now two peoples in Palestine, irrespective of how they came into being, and the conflict between them cannot be resolved as long as the national existence of each is denied by the other.’"—Rob Malley, International Crisis Group CEO and White House Coordinator for the Middle East under President Barack Obama

“Rashid Khalidi makes clear that the Zionists could not have created modern day Israel without abundant help from Britain and the United States. A must read for the growing number of people who are interested in understanding the real roots of the Israeli-Palestinian conflict.”—John J. Mearsheimer, coauthor of The Israel Lobby

“With moral passion and analytical rigor, Khalidi skillfully unearths the narrative of a long and bitter national conflict, providing a multitude of timely, acute, and original insights. This compelling book is a must read.”—Zeev Sternhell, author of The Anti-Enlightenment Tradition

“In a painfully sober analysis of what made Zionism, an anachronistic colonialist enterprise, so successful, Rashid Khalidi also shows how Palestinians defy fatalism and refuse to vanish. His book is a tribute and contribution to his people’s perseverance.”—Amira Hass, author of Drinking the Sea at Gaza

“This fascinating and instructive blend of autobiography and history should be read by anybody who wants to understand the tragedy of Palestine and the Palestinians.”—Patrick Cockburn, author of The Rise of the Islamic State

“Rashid Khalidi has produced a sophisticated and insightful historical analysis of the Palestine-Israel conflict that is enriched by deep knowledge, clear and critical views, and his own experiences of key moments.”—Ian Black, author of Enemies and Neighbors: Arabs and Jews in Palestine and Israel, 1917-2017

“This searing account makes clearer than ever the often deliberately understated colonial nature of the Palestinian experience—and it reminds us of the Palestinians’ extraordinary capacity to remain steadfast despite the local and global forces arrayed against them.”—Saree Makdisi, author of Palestine Inside Out: An Everyday Occupation of Culture

There are plenty of cases of war being begun before it is declared.

At the turn of the twentieth century, before Zionist colonization...

Rashid Khalidi is the author of Palestinian Identity, Brokers of Deceit, and The Iron Cage, among others. His writing has appeared in the New York Times, Boston Globe, Los Angeles Times, Chicago Tribune, and many other journals. He is the Edward Said Professor of Modern Arab Studies at Columbia University in New York and editor of the Journal of Palestine Studies.