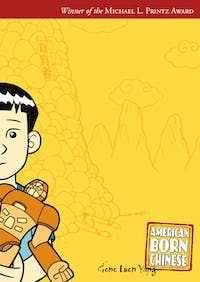 American Born Chinese tells the story of three apparently unrelated characters: Jin Wang, who moves to a new neighborhood with his family only to discover that he's the only Chinese-American student at his new school; the powerful Monkey King, subject of one of the oldest and greatest Chinese fables; and Chin-Kee, a personification of the ultimate negative Chinese stereotype, who is ruining his cousin Danny's life with his yearly visits. Their lives and stories come together with an unexpected twist in this modern fable.

"American Born Chinese blends Chinese and American cultures in inventive, unexpected ways . . . This image of the blending of Asian-American and white cultures will be tested in the coming years. As the white population in America falls below 50 percent, around 2060 (according to census projections), the definition of "white" is once again set to expand as it did for Italian- and Irish-Americans. Who will get to join the club? Or will the club finally fall to pieces? Caught up in these complex questions, it is easy to forget that American Born Chinese also functions well as a comic book . . . Gene Luen Yang has created that rare article: a youthful tale with something new to say about American youth . . . It is excellent, and the variety of the art ensures that the reader never gets bored."—Ned Vizzini, The New York Times Book Review

"[American Born Chinese is] touching, hilarious and brilliantly written and structured . . . It's a tale of growing up as a Chinese American boy in the mostly white suburbs, about running the adolescent gauntlet of squirmy lust, pathetic self-pity, raging jealousy and black despair and, ultimately, coming to terms with who you are. It's an intimate, personal story."—San Francisco Chronicle

"It looks almost like a children's book, with bold, bright drawings. Most of the characters are kids, except for the monkeys, demons, deities and handful of grownups. But though it's ideal for precocious preteens, American Born Chinese is brilliantly written and designed, sophisticated and wise. A finalist for the 2006 National Book Award in Young People's Literature, it's also more than suitable for adults. Yang's three seemingly disparate stories merge into a single, powerful conclusion, and along the way he offers poignant glimpses of awkward Chinese-American youths trying to transcend their own and others' images of race and normality. Peer pressure, awakening self-awareness and sexuality and a legendary monkey king all serve to smash stereotypes and reinforce the universality of being quite cool by being yourself."—The Miami Herald

"American Born Chinese is, in a word, remarkable . . . Yang manages to weave three very different storylines into a perfectly melded, poignant whole by the book's end. Not to mention those clean, clear graphics that add a seemingly fully realized, three-dimensional quality to the flat pages."—The Bloomsbury Review

"A powerful examination of the desire to fit in while growing up, in which being Asian in America is either the central conflict or a metaphor for it, depending on the reader's own identity."—Las Vegas Weekly

"A graphic novel so dynamic you won't be able to put it down."—The Charleston Gazette

"American Born Chinese has the distinction of being the first graphic novel ever nominated for a National Book Award, and it earns it. It's a funny book at times, what with its over-the-top character of Cousin Chin-Kee, whose sitcom tale is told in one of the book's three storylines. But the other two storylines are something different entirely. In one, the heroic legend of the Monkey King is illustrated (a huge folk hero in Chinese culture, the Monkey King is well-known to almost every Chinese child); and in the third, the titular character, Jin Wang, moves with his family from San Francisco's Chinatown into a suburb. How he manages—and doesn't manage—to fit in form the heart of the novel. American Born Chinese's ability to deal honestly with the pains of adolescent isolation make it so compellingly readable. Perhaps Gene Luen Yang's occupation as a high-school teacher gives him the authenticity this novel uses so effectively, or perhaps he truly can tap into the angst and agita of the teenage years. Either way, it works so well that you can't help but feel immediately moved and caught up in it."—John Hogan, Graphic Novel Reporter


"The graphic novel format is particularly well suited to managing the flow of three simultaneous storylines, and the action sequences of the Monkey King's tale and over-the-top satire on the portrayal of immigrants in American pop culture settle right into their spacious frames on the generously white bordered pages. Compositions are tidy and the palette is softly muted, so that even the strongest colors in the action scenes never reach the intensity of a visual assault. Kids fighting an uphill battle to convince parents and teachers of the literary merit of graphic novels will do well to share this title. Recommended."—Bulletin of the Center for Children's Books

"As an Asian American, American Born Chinese is the book I've been waiting for all my life."—Derek Kirk Kim

"This graphic novel first appeared as a long running web comic on http://www.moderntales.com, where it enjoyed an enthusiastic following. The artwork is clean and distinctive, with varying panel styles and inking that is visually appealing . . . This graphic novel could be especially cathartic for teens and adults of Asian descent, but people of any ethnicity would find themselves reflected in the universal themes of self-acceptance, peer pressure, and racial tensions. This book is recommended."—Sherrie Willians, VOYA


"This is one of the best graphic novels I've read this year . . . It is highly recommended."—KLIATT

"With vibrant colors and visual panache, indie writer-illustrator Yang focuses on three characters in tales that touch on facets of Chinese American life . . . Each of the characters is flawed but familiar, and, in a clever postmodern twist, all share a deep, unforeseen connection. Yang helps the humor shine by using his art to exaggerate or oppose the words, creating a synthesis that marks an accomplished graphic storyteller. The stories have a simple, engaging sweep to them, but their weighty subjects––shame, racism, and friendship––receive thoughtful, powerful examination."—Booklist

"Graphic novels that focus on nonwhite characters are exceedingly rare in American comics. Enter American Born Chinese, a well-crafted work that aptly explores issues of self-image, cultural identity, transformation, and self-acceptance . . . [A] satisfying coming-of-age novel that aptly blends traditional Chinese fables and legends with bathroom humor, action figures, and playground politics. Yang's crisp line drawings, linear panel arrangement, and muted colors provide a strong visual complement to the textual narrative. Like Toni Morrison's The Bluest Eye and Laurence Yep's Dragonwings, this novel explores the impact of the American dream on those outside the dominant culture in a finely wrought story that is an effective combination of humor and drama."—School Library Journal (starred review)

"True to its origin as a Web comic, this story's clear, concise lines and expert coloring are deceptively simple yet expressive. Even when Yang slips in an occasional Chinese ideogram or myth, the sentiments he's depicting need no translation. Yang accomplishes the remarkable feat of practicing what he preaches with this book: accept who you are and you'll already have reached out to others."—Publishers Weekly

Gene Luen Yang writes, and sometimes draws, comic books and graphic novels. He was named a National Ambassador for Young People’s Literature by the Library of Congress in 2016, and advocates for the importance of reading, especially reading diversely. His graphic novel American Born Chinese, a National Book Award finalist and Printz Award winner, has been adapted into a streaming series. His two-volume graphic novel Boxers & Saints won the LA Times Book Prize and was a National Book Award Finalist. His nonfiction graphic novel, Dragon Hoops, received an Eisner award and a Printz honor. His other comics work includes Secret Coders (with Mike Holmes), The Shadow Hero (with Sonny Liew), and Superman Smashes the Klan and the Avatar: The Last Airbender series (both with Gurihiru). In 2016, he was named a MacArthur Foundation Fellow.