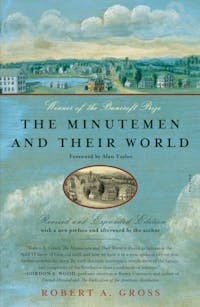 The Minutemen and Their World, first published in 1976, is reissued now in a revised and expanded edition with a new preface and afterword by the author.

On April 19, 1775, the American Revolution began at the Old North Bridge in Concord, Massachusetts. The “shot heard round the world” catapulted this sleepy New England town into the midst of revolutionary fervor, and Concord went on to become the intellectual capital of the new republic. The town—future home to Emerson, Thoreau, and Hawthorne—soon came to symbolize devotion to liberty, intellectual freedom, and the stubborn integrity of rural life.

In The Minutemen and Their World, Robert A. Gross has written a remarkably subtle and detailed reconstruction of the lives and community of this special place, and a compelling interpretation of the American Revolution as a social movement.

"A richly detailed picture of social life and social divisions in Concord, and a lively narrative of the coming of the Revolution there."—Edmund S. Morgan, The New York Review of Books

"Robert Gross's The Minutemen and Their World is almost as famous as the April 19th battle of Concord itself, and now we have it in a new updated edition that further enriches the story. By itself this little masterpiece reveals more of the nature and complexity of the Revolution than a multitude of volumes."—Gordon S. Wood, professor emeritus at Brown University and author of Friends Divided and The Radicalism of the American Revolution

"The Minutemen and Their World remains as fresh and important as when it was first published in 1976. It has taught generations of readers to look behind the Revolution’s slogans and heroes to see actual men and women making difficult decisions in a far from perfect world."—Kathleen DuVal, author of Independence Lost: Lives on the Edge of the American Revolution

"You may think you know this most iconic of American stories—but as the ongoing research deployed in this great book make clear, it's a deeper, richer, more nuanced, complicated, and shadowed story than we once imagined. And utterly absorbing."—Bill McKibben, author of The Flag, the Cross, and the Station Wagon

"Just in time for the Revolution’s 250th anniversary, this updated edition of The Minutemen and their World reveals the intimate human calculation that always lies behind vast public events. Robert A. Gross surfaces and shares the stories of ordinary New Englanders with extraordinary insight and compassion. From house to house and farm to farm, as Gross walks alongside Concord residents—affluent and indigent; enslaved, indentured, and free; across generations and gender—he shows how everyday men and women navigated years of acute division and crisis. There is no better way to come to grips with the rupture of Revolution."—Marla Miller, professor of history at the University of Massachusetts Amherst and author of Entangled Lives: Labor, Livelihood, and Landscapes of Change in Rural Massachusetts and Betsy Ross and the Making of America.

"The Minutemen and Their World is a must read for those who wish to understand life at the dawn of the American Revolution beyond familiar stories and static archetypes. It remains an example of masterful writing. To enthralling prose, Bob Gross adds fresh research and innovative historical methods that illuminate the lives of free and enslaved African American members of the famous Concord community and their military services to the nascent United States. This book never loses sight of people, offering readers a wider, more intricate view into the lives of women and men in America’s revolutionary generation."—Ronald Angelo Johnson, Ralph and Bessie Mae Lynn Chair of History at Baylor University and author of Diplomacy in Black and White: John Adams, Toussaint Louverture, and Their Atlantic World Alliance

"What does it feel like to experience revolution? For decades, The Minutemen and Their World has been the indispensable account explaining how revolution and civil war transformed the lives of everyday Americans. Now, updated with new discoveries and more voices, it is even more essential to understanding what it was like to live through the unprecedented changes—and painful struggles—of the American Revolution."—Robert Parkinson, associate professor of history at Binghamton University, and author of Thirteen Clocks: How Race United the Colonies and Made the Declaration of Independence

"Robert Gross’s The Minutemen and Their World is still unsurpassed in capturing the personal and communal experience of the American Revolution. This updated edition reinvigorates this indispensable book for a new generation of readers and scholars."—Mark Boonshoft, professor of history at Virginia Military Institute and author of Aristocratic Education and the Making of the American Republic

"In this eloquent book, Robert Gross gives us a Concord that we have not encountered before, a surprising place that turns out to be not the quaint community of myth and legend, but a lively society, deeply engaged in the great issues of its revolutionary time—with all the tensions, anxieties, and aspirations that human beings share."—Linda K. Kerber

"The Minutemen and Their World makes the American Revolution live—a vivid, compelling book that dramatizes the political consciousness and armed conflict in the very birthplace of the Revolutionary War. Few books have so brilliantly stood the test of time."—Jon Butler

"For historians, The Minutemen and Their World was a shot heard round the world. It taught us that fine history combines good scholarship with good writing. Its reverberations are still being heard."—Laurel Thatcher Ulrich

"The Minutemen and Their World is a classic in—well, the classic sense of the word: a book of such enduring elegance and interest that it will find a readership in every generation."—Joyce Appleby

1 “Do Not Be Divided for So Small Matters”

CONCORD ARRIVED AT ITS strategic position in 1775 only after a good deal of foot-dragging. While Bostonians fulminated against British policies in the 1760s and early 1770s, the...

Robert A. Gross is the James L. and Shirley A. Draper Professor of Early American History Emeritus at the University of Connecticut. He is the author of The Minutemen and Their World (1976), which won the Bancroft Prize; Books and Libraries in Thoreau’s Concord (1988); and The Transcendentalists and Their World (2021). With Mary Kelley, he is the coeditor of An Extensive Republic: Print, Culture, and Society in the New Nation, 1790–1840 (2010). A former assistant editor of Newsweek, he has written for such periodicals as Esquire, Harper’s Magazine, The Boston Globe, and The New York Times, and his essays have appeared in The American Scholar, The New England Quarterly, Raritan, and The Yale Review.