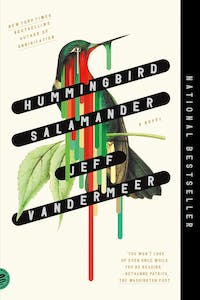 “Jane Smith”—not her real name—receives an envelope that contains a note from a woman she doesn’t know and a key to an anonymous storage unit. The key leads her to a pair of taxidermied animals, a hummingbird and a salamander, which turn out to be two of the most endangered creatures on earth.

Jane has set in motion a series of events that quickly spin beyond her control. She is being followed, her home surveilled, her family in peril. The author of the mysterious note—Jane’s only real lead—is already dead. She was, Jane learns, a reputed ecoterrorist. What did she want with Jane?

Profiteering wildlife smugglers; an amoral energy company; an extremist’s apocalyptic vision. The threats come from all around, and time is running out—for Jane and possibly for the world.

Hummingbird Salamander is Jeff VanderMeer at his dazzling, cinematic best, wrapping profound questions into a tightly plotted tale of the fight to survive.

"This is climate fiction at its most urgent and gripping.”—Helen Phillips, The New York Times

"Now from this daring and ever-shifting author comes Hummingbird Salamander, a volume more naturalistic, more like a traditional thriller than its predecessors, but one that also features hooks into the literary novel of paranoid conspiracy, a genre best exemplified by Thomas Pynchon’s The Crying of Lot 49. In fact, our doughty and frankly terrifying heroine, 'Jane Smith,' might be the Oedipa Maas the 21st century needs.”—Paul Di Filippo, The Washington Post

"You won't look up even once while you're reading."—The Washington Post

"In Hummingbird Salamander, VanderMeer enters the realm of crime, noir and mysteries while retaining his signature topics of environmentalism, climate change and shifting identities and realities . . . it signals a step in a new direction, one that’s both weirder and closer to our reality. It’s also a novel that brilliantly explores the way we abuse the Earth and how we 'have built so many mirrors, there are no windows to shatter.' At once enigmatic and fast, obscure and brilliant, Hummingbird Salamander celebrates nature while inviting us to contemplate the effects of contamination, pandemics and other crises, and how none of them make us 'even blink anymore.'"—Gabino Iglesias, San Francisco Chronicle

"VanderMeer delights in propelling the narrative forward while leaving the characters and the reader off-balance. Relentlessly versatile but best known as an author of trippy science fiction and fantasy with an ecological bent, [he] adopts the attitude and accoutrements of the hard-boiled detective novel, set in a very near future of climate collapse."—Michael Berry, Sierra Magazine

"This inventive and surprising page-turner may be the purest demonstration yet of VanderMeer’s knack for dressing up fascinating philosophical conundrums in the clothing of a taut, breakneck thriller."—A.V. Club

"[T]he news cycle may be chaotic right now, but we've got book news to offer a balm—especially for Jeff VanderMeer fans. The best-selling Annihilation author will be releasing another deliciously dark tale, this time covering everything from conspiracy theories to endangered species."—Seija Rankin, Entertainment Weekly

"Hummingbird Salamander is harrowing, gripping, and profound. It's both a thriller and a requiem for a disappearing world. I expect this novel will haunt me for a long time."—Emily St. John Mandel, author of Station Eleven

“Jeff VanderMeer's Hummingbird Salamander is an existential mindfuck cleverly disguised as a thriller. Though the plot never stops rocketing forward, this astonishing novel continually shifts and expands in scale, until the puzzle the narrator is tasked with solving at the outset becomes an almost Matrix-like invitation to open herself up to a new and shattering understanding of her world, and ours. Visionary, dark, beautiful, and strange, Hummingbird Salamander is that rare novel that coaxes you into imagining the unimaginable."—Kristen Roupenian, author of Cat Person and Other Stories

“A strange, seductive eco-thriller ripe for our era.”—Silvia Moreno-Garcia, author of Mexican Gothic

“This is an astonishing book, topical and madly compelling. A timely, unsettling novel of obsession and descent—a thriller equal parts ecological and psychological, whose puzzle warns of a natural world on the edge of ruination. There's an urgency to it, but it's not preachy. VanderMeer shines in revealing our current dystopia.”—Chuck Wendig, bestselling author of Wanderers

“Hummingbird Salamander is a profound and incendiary thriller hurtling backward from the end of the world. Jeff VanderMeer’s tale of ecological and personal obsession inhabits that strange, surreal space where the natural world and human ambition collide—a space almost no other writer has chronicled with as much reverence and imaginative lucidity. The result is a detective story unlike any I’ve read before, futuristic in bearing but deeply relevant to this present, dangerous moment.”—Omar El Akkad, award-winning journalist and author of American War

“This gripping eco-thriller pulls readers into a world of danger, mystery, and obsession. Surprising, suspenseful, and compelling, Hummingbird Salamander is in turns insidious and explosive, heartrending and beautiful. Riveting.”—Meg Gardiner, Edgar-Award-winning author of the UNSUB series

"Jane has a number of things in common with Stieg Larsson’s heroine: She can pound most dudes into tapioca, and she’s pretty handy with a gun and a computer, too."—Kirkus Reviews (starred review)

"Riveting . . . VanderMeer is a marvelous craftsman. Every word here feels carefully chosen; every sentence has a purpose; every plot point causes ripples felt through the rest of the story . . . The author’s devoted fans will flock to this novel, and they will be richly rewarded. Switching genres with aplomb, VanderMeer knocks his conspiracy thriller out of the park."—Booklist (starred review)

"Set in a world far along the path to ecological and political breakdown, this striking mix of thriller and biotech speculative fiction from VanderMeer charts a seemingly mad quest by its anonymous narrator . . . Exquisite prose pulls the reader deep into the labyrinthine plot. VanderMeer reinforces his place as one of today’s most innovative writers."—Publishers Weekly (starred review)

Assume I’m dead by the time you read this. Assume you’re being told all of this by a flicker, a wisp, a thing you can’t quite get out of your head now that you’ve found me. And in the beginning, it’s you, not me, being...

Jeff VanderMeer is the author of Hummingbird Salamander, the Borne novels (Borne, Strange Bird, and Dead Astronauts), and The Southern Reach Trilogy (Annihilation, Acceptance, and Authority), the first volume of which won the Nebula Award and the Shirley Jackson Award and was adapted into a movie by Alex Garland. He speaks and writes frequently about issues relating to climate change as well as urban rewilding. He lives in Tallahassee, Florida, on the edge of a ravine, with his wife, Ann VanderMeer, and their cat, Neo.