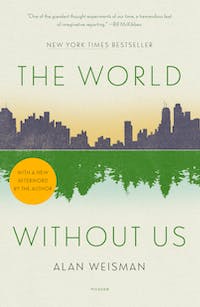 The World Without Us is a penetrating, page-turning tour of a post-human Earth. Drawing on the expertise of engineers, atmospheric scientists, art conservators, zoologists, oil refiners, marine biologists, astrophysicists, religious leaders from rabbis to the Dalai Lama, and paleontologists, Alan Weisman deftly illustrates what the planet might be like today, if not for us.

In this revelatory account, Alan Weisman explains how our massive infrastructure would collapse and finally vanish without human presence; which everyday items may become immortalized as fossils; how copper pipes and wiring would be crushed into mere seams of reddish rock; why some of our earliest buildings might be the last architecture left; and how plastic, bronze sculpture, and radio waves may be our most lasting gifts to the universe.

As he shows which human devastations are indelible, and which examples of our highest art and culture would endure longest, Weisman draws on every field of science to present an environmental assessment like no other. This is narrative nonfiction at its finest—one of the most affecting portraits yet of humankind's place on this planet.

“A fascinating nonfiction eco-thriller . . . Weisman's gripping fantasy will make most readers hope that at least some of us can stick around long enough to see how it all turns out.”—The New York Times Book Review

“The book boasts an amazingly imaginative conceit that manages to tap into underlying fears and subtly inspire us to consider our interaction with the planet.”—The Washington Post

“In his provocative new book, The World Without Us, Alan Weisman adds a dash of fiction to his science to address a despairing problem: the planet's health.”—U.S. News & World Report

“The World Without Us gradually reveals itself to be one of the most satisfying environmental books of recent memory, one devoid of self-righteousness, alarmism, or tiresome doomsaying.”—Pittsburgh Post-Gazette

“An astonishing mass of reportage that envisions a world suddenly bereft of humans.”—The Atlanta Journal-Constitution

“One of the most ambitious 'thought experiments' ever.”—The Cincinnati Enquirer

“A refreshing, and oddly hopeful, look at the fate of the environment.”—Businessweek

“Alan Weisman has produced, if not a Bible, at least a Book of Revelation.”—Newsweek

“Brilliantly creative . . . An audacious intellectual adventure . . . His thought experiment is so intellectually fascinating, so oddly playful, that it escapes categorizing and clichés . . . It sucks us in with a vision of what is, what has been, and what is yet to come . . . It's a trumpet call that sounds from the other end of the universe and from inside us all.”—Salon

“This book is the very DNA of hope.”—The Globe and Mail (Toronto)

“This is one of the grandest thought experiments of our time, a tremendous feat of imaginative reporting.”—Bill McKibben, author of The End of Nature and Deep Economy: The Wealth of Communities and the Durable Future

“Alan Weisman offers us a sketch of where we stand as a species that is both illuminating and terrifying. His tone is conversational and his affection for both Earth and humanity transparent.”—Barry Lopez, author of Arctic Dreams

“The imaginative power of The World Without Us is compulsive and nearly hypnotic—make sure you have time to be kidnapped into Alan Weisman's alternative world before you sit down with the book, because you won't soon return. This is a text that has a chance to change people, and so make a real difference for the planet.”—Charles Wohlforth, author of Los Angeles Times Book Prize–winning The Whale and the Supercomputer

“An exacting account of the processes by which things fall apart. The scope is breathtaking . . . the clarity and lyricism of the writing itself left me with repeated gasps of recognition about the human condition. I believe it will be a classic."—Dennis Covington, author of National Book Award finalist Salvation on Sand Mountain

“Fascinating, mordant, deeply intelligent, and beautifully written, The World Without Us depicts the spectacle of humanity's impact on the planet Earth in tragically poignant terms that go far beyond the dry dictates of science. This is a very important book for a species playing games with its own destiny.”—James Howard Kunstler, author of The Long Emergency

“Weisman is a thoroughly engaging and clarion writer fueled by curiosity and determined to cast light rather than spread despair. His superbly well-researched and skillfully crafted stop-you-in-your-tracks report stresses the underappreciated fact that humankind's actions create a ripple effect across the web of life.”—Booklist (starred review)

“Weisman's enthralling tour of the world of tomorrow explores what little will remain of ancient times while anticipating, often poetically, what a planet without us would be like.”—Publishers Weekly (starred review)

A Lingering Scent of Eden

You may never have heard of the Bialowieza Puszcza. But if you were raised somewhere in the temperate swathe that crosses much of North America, Japan, Korea, Russia, several former Soviet republics,...

Alan Weisman, Author of The World Without Us

Watch this amazing demonstration of what will happen to your house over the next 500 years when left to the forces of Mother Nature. Learn more about the post-human Earth in THE WORLD WITHOUT US, by Alan Weisman.

Alan Weisman is the author of several books, including The World Without Us—a National Book Critics Circle Award finalist, winner of the Wenjin Book Prize of the National Library of China, and an international bestseller translated in 34 languages. An award-winning journalist, his reports have appeared in Harper's, New York Times Magazine, Atlantic Monthly, Discover, Vanity Fair, and Mother Jones. A former contributing editor to Los Angeles Times Magazine, Weisman is a senior radio producer for Homelands Productions. He lives in Massachusetts.