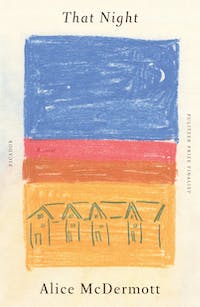 A Finalist for the Pulitzer Prize and the National Book Award

It is high summer, the early 1960s. Sheryl and Rick, two Long Island teenagers, share an intense, all-consuming love. But Sheryl's widowed mother steps between them, and one moonlit night Rick and a gang of hoodlums descend upon her quiet neighborhood. That night, driven by Rick's determination to reclaim Sheryl, the young men provoke a violent confrontation, and as fathers step forward to protect their turf, notions of innocence belonging to both sides of the brawl are fractured forever.

"At once mythic and personal—a novel that possesses the ability to make us remember our own youth and all that has vanished since." —Michiko Kakutani, The New York Times

"Something new entirely . . . a slim novel of almost nineteenth century richness, a novel that celebrates the life of its suburban world at the same time that it mourns that world's failures and disappointments . . . That drama . . . is rendered with an almost operatic grandeur . . . In spite of its brevity, That Night is a wonderfully unfettered, ample novel, one that celebrates voice, personality, and feeling when so much fiction avoids those rewarding characteristics . . . Splendid." —The New York Times Book Review

"To enter the world of this incantatory novel is to palpably recall almost against one's will the rash, embattled strivings and disillusionments of first love." —The Washington Post Book World

"McDermott has gracefully captured the haunted essence of suburban fence-culture—that eclipsed decade when you may have dared a glance at the sun, and wound up paying for the rest of your life." —The Boston Globe

"Voiced with musical economy . . . the author's perceptions of suburban life have a rich detail of the quality of a Cheever or an Updike." —Los Angeles Times

"Ms. McDermott brilliantly manipulates the particulars of this story, these characters, and that night to show them as both unique and universal . . . Perfectly evokes the suburban climate of the sixties." —San Francisco Chronicle

"McDermott is so assured, her prose so spare and swift, that not once does she come even close to sentimentality. With tremendous skill and control, she counters the poignancy of the past with sharp realities." —The Plain Dealer (Cleveland)

"Evokes in a masterly way the one moment when a single incident so thoroughly assaults the sensibilities as to alter life significantly . . . Ms. McDermott seamlessly employs several innovative techniques that would have stymied a less intrepid writer" —The Baltimore Sun

"McDermott is a spellbinder, adding a cachet of mystery and eloquence to common occurrences . . . She has taken a suburban teenage romance and pregnancy and infused it with the power, the ominousness, and the star-crossed romanticism of a contemporary Romeo and Juliet." —Chicago Tribune

"A strong, eloquent novel . . . McDermott writes clean, simple prose that serves her story beautifully. This novel is as carefully constructed as a poem, giving off a lustrous glow, and is poignant in the telling." —People

"A real gem . . . There is little so uplifting as simply reading a wonderful story, marvelously told." —Joyce Maynard, Mademoiselle

"Constructed as tightly as a rose . . . McDermott writes of the poignancy of Then and Now with a grace and richness admirably unruffled by the fashionable tendency to minimalize' emotion." —Rosellen Brown, Ms.

"Further developing the inventive narrative technique she used in A Bigamist's Daughter, McDermott masterfully blurs the lines between reality and illusion, offering a work on several levels. Her narrator reflects on an incident that shattered the serenity and naivete of her suburban world of the early 1960s, when she was 10 years old, and claims that event as a point of departure for her fertile imaginative powers. An opening scene of violence played out under a 'bright navy sky' on a soft midsummer night 'when Venus was bright,' captures the tone and focus of the novel, which recalls the doomed love affair of teenagers Sheryl and Rick. McDermott makes the relationship between her two ordinary, unattractive protagonists poignant and believable. A mesmerizing storyteller, she evokes the aching vulnerability of adolescent love, in this case between two lost, despairing not-quite-adults. The forced parting of the two teenagers also marks a rite of passage for the other families in the middle-class Long Island neighborhood, as parents comprehend that even their fierce love for their children will not be enough protection against life's inevitable blows. In spare prose of remarkable acuity, McDermott captures a time and place and a social era. Her narrative voice, romantically elegiac and yet premonitory of doom, is strong and compelling." —Publishers Weekly

ONE
That night when he came to claim her, he stood on the short lawn before her house, his knees bent, his fists driven into his thighs, and bellowed her name with such passion that even the friends who...

Alice McDermott is the author of several novels, including The Ninth Hour; Someone; After This; Charming Billy, winner of the 1998 National Book Award; At Weddings and Wakes; and That Night—all published by FSG. That Night, At Weddings and Wakes, and After This were finalists for the Pulitzer Prize. Her stories and essays have appeared in The New York Times, The Washington Post, The New Yorker, Harper’s Magazine, and other publications. For more than two decades she was the Richard A. Macksey Professor for Distinguished Teaching in the Humanities at Johns Hopkins University and a member of the faculty at the Sewanee Writers’ Conference. McDermott lives with her family outside Washington, D.C.