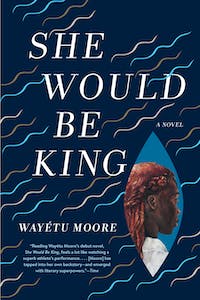 Wayétu Moore’s powerful debut novel, She Would Be King, reimagines the dramatic story of Liberia’s early years through three unforgettable characters who share an uncommon bond. Gbessa, exiled from the West African village of Lai, is starved, bitten by a viper, and left for dead, but still she survives. June Dey, raised on a plantation in Virginia, hides his unusual strength until a confrontation with the overseer forces him to flee. Norman Aragon, the child of a white British colonizer and a Maroon slave from Jamaica, can fade from sight when the earth calls him. When the three meet in the settlement of Monrovia, their gifts help them salvage the tense relationship between the African American settlers and the indigenous tribes, as a new nation forms around them.

Moore’s intermingling of history and magical realism finds voice not just in these three characters but also in the fleeting spirit of the wind, who embodies an ancient wisdom. “If she was not a woman,” the wind says of Gbessa, “she would be king.” In this vibrant story of the African diaspora, Moore, a talented storyteller and a daring writer, illuminates with radiant and exacting prose the tumultuous roots of a country inextricably bound to the United States. She Would Be King is a novel of profound depth set against a vast canvas and a transcendent debut from a major new author.

“Moore skillfully reconsiders the idealism of the early African-American settlers through their interactions with the indigenous peoples and braids together intimate story lines centered around universal themes: falling in love, defying familial expectations and the difficulties of doing the right thing.”—The New York Times

“[A] bold debut . . . The force and the symbolism of myth pervade Moore’s engrossing tale.”—The New Yorker

“Reading Wayétu Moore’s debut novel, She Would Be King, feels a lot like watching a superb athlete’s performance . . . Moore makes deft use of magical realism, and her plot and its details are compelling . . . Like her remarkable protagonist Gbessa, the author has tapped into her own backstory—and emerged with literary superpowers.”—TIME

“This compelling debut novel by Wayétu Moore blends historical fiction with magical realism in an exhilarating tale of the formation of Liberia. Moore effortlessly weaves the threads of indigenous West African tribes, American and Caribbean slavery, and British colonialism together to tell the creation story of a new nation, complete with unforgettable characters and a dynamic voice.”—Marie Claire

“Fans of Gabriel Garcia Marquez will be intrigued by this debut novel, a reimagining of Liberia’s infancy in the 19th century.”—Harper’s Bazaar

“Moore’s debut unflinchingly depicts the convergence of brutal forces—colonialism, the slave trade—while brushing it with a glimmer of magic.”—HuffPost

“Moore veers from fantasy to lush descriptions and sharp characterization, shedding light on the fleeting moment when the vast African diaspora reversed itself.”—Vulture

“Stunning . . . It is an epic narrative, weaving together themes of diasporic conflict, the legacy of bondage, isolation, and community, and it offers a transcendent, important look at the ways in which the past is never fully behind us, and instead echoes throughout everything we do.”—NYLON

“This dynamic novel leaves you both satisfied and full of anticipation for what’s to come, in fiction and in reality.”—The Rumpus

“The dialogue is fluid and poetic, allowing readers to imagine the events, sights, smells, feelings, and sensations. As with Yaa Gyasi’s Homegoing, this work will appeal to lovers of African, African American, and literary fiction.”—Library Journal (starred review)

“An ambitious, genre-hopping, continent-spanning novel . . . Moore is a brisk and skilled storyteller who weaves her protagonists' disparate stories together with aplomb yet is also able to render her sprawling cast of characters in ways that feel psychologically compelling. In addition, the novel's various settings—Virginia, Jamaica, and West Africa—are depicted so lushly that readers will find themselves enchanted.”—Kirkus Reviews

Wayétu Moore is the founder of One Moore Book and is a graduate of Howard University, Columbia University, and the University of Southern California. She teaches at the City University of New York’s John Jay College and lives in Brooklyn.