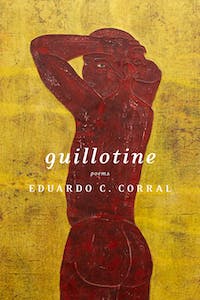 Guillotine traverses desert landscapes cut through by migrants, the grief of loss, betrayal’s lingering scars, the border itself—great distances in which violence and yearning find roots. Through the voices of undocumented immigrants, border patrol agents, and scorned lovers, award-winning poet Eduardo C. Corral writes dramatic portraits of contradiction, survival, and a deeply human, relentless interiority. With extraordinary lyric imagination, these poems wonder about being unwanted or renounced. What do we do with unrequited love? Is it with or without it that we would waste away?

In the sequence “Testaments Scratched into Water Station Barrels,” with Corral’s seamless integration of Spanish and English, poems curve around the surfaces upon which they are written, overlapping like graffiti left by those who may or may not have survived crossing the border. A harrowing second collection, Guillotine solidifies Corral’s place in the expanding ecosystem of American poetry.

“Corral nimbly bridges the personal and political, evoking themes of migration to ask what it means to be unwanted.”—The New York Times Book Review

“No matter what his subject, Corral is a gifted storyteller, precise and dizzying with his imagery.”—The Millions

“Eduardo Corral’s ravishing new collection begins with a ceremony of touch-hunger and self-abnegation . . . An erotics of loneliness, a deep song of exile, of indefinable yearning. At times, even the text itself blurs. It’s as if I am reading through smoke, through tears.”—Diane Seuss

“These poems step ‘into the grit / & whirl’ of the desert like a fervent saint: devotional, rhapsodic, divine . . . Guillotine is a timely, excoriating, and captivating book born of perilous times.”—D. A. Powell

“A master artist . . . Only a poet as skilled as Corral could connect rejection from the US nation-state with unrequited love to such effect. Carefully code-switching between Spanish and English, Corral is a poet to be studied for his radical contributions to the American canon.”—Natalie Scenters-Zapico

“Devastating and electrifying . . . Shot through with the dark realities of human tragedy, Corral’s latest is a virtuosic compendium of grief."—Publishers Weekly (starred review)

Eduardo C. Corral is the author of Slow Lightning, winner of the Yale Younger Poets Prize, and a recipient of a Whiting Writers' Award and the Hodder Fellowship from Princeton University. He teaches at North Carolina State University.