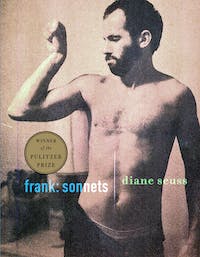 “The sonnet, like poverty, teaches you what you can do / without,” Diane Seuss writes in this brilliant, candid work, her most personal collection to date. These poems tell the story of a life at risk of spilling over the edge of the page, from Seuss’s working-class childhood in rural Michigan to the dangerous allures of New York City and back again. With sheer virtuosity, Seuss moves nimbly across thought and time, poetry and punk, AIDS and addiction, Christ and motherhood, showing us what we can do, what we can do without, and what we offer to one another when we have nothing left to spare. Like a series of cells on a filmstrip, frank: sonnets captures the magnitude of a life lived honestly, a restless search for some kind of “beauty or relief.” Seuss is at the height of her powers, devastatingly astute, austere, and—in a word—frank.

“The lightning intelligence of Diane Seuss’s poems strikes equally the lavish external world and the harrowed interior. A brilliant and devastating account of the making and survival of a poet, frank: sonnets has a relentless, lambent urgency; by its final pages I had to remind myself to breathe.”—Garth Greenwell

“Every poem in frank: sonnets is an example of the incomparable Seussian Sonnet . . . Acute, resolute, buoyant, and unflinching, frank rings loudest as a synonym for candor, so much do these poems feel tethered to a real life, a real world, simultaneously grounded and spiritual, verbal and existential, with resonances of the blues.”—Terrance Hayes

“Good lord. I’ve rarely read a book that feels so intimate, so spoken. I’ve rarely read a book that makes me feel so spoken to. So with. These are poems born of a kind of wrought faith that, despite all the breaking, language still might bring us closer to each other, and closer to ourselves. Diane Seuss’s frank: sonnets shares that faith with us. And goddamn, I am so grateful for that.”—Ross Gay