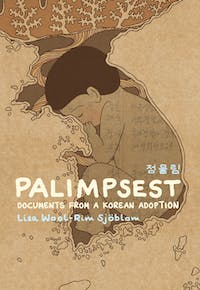 Thousands of South Korean children were adopted around the world in the 1970s and 1980s. More than nine thousand found their new home in Sweden, including the cartoonist Lisa Wool-Rim Sjöblom, who was adopted when she was two years old. Throughout her childhood she struggled to fit into the homogenous Swedish culture and was continually told to suppress the innate desire to know her origins. “Be thankful,” she was told; surely her life in Sweden was better than it would have been in Korea. Like many adoptees, Sjöblom learned to bury the feeling of abandonment.

In Palimpsest, an emotionally charged memoir, Sjöblom’s unaddressed feelings about her adoption come to a head when she is pregnant with her first child. When she discovers a document containing the names of her biological parents, she realizes her own history may not match up with the story she’s been told her whole life: that she was an orphan without a background.

As Sjöblom digs deeper into her own backstory, returning to Korea and the orphanage, she finds that the truth is much more complicated than the story she was told and struggled to believe. The sacred image of adoption as a humanitarian act that gives parents to orphans begins to unravel.

Sjöblom’s beautiful autumnal tones and clear-line style belie the complicated nature of this graphic memoir’s vital central question: Who owns the story of an adoption?

"Palimpsest is a beautifully rendered and emotionally gripping graphic novel that underlines the multitudes of losses transnational adoptees experience. In telling her story, Sjöblom illustrates the violence adoptees experience as a result of being denied access to their own histories. Palimpsest artfully captures the personal struggles of transnational adoptee birth search, as well as the inequities and injustices embedded within the history of the international adoption industry."—Kim Park Nelson, Invisible Asians: Korean American Adoptees, Asian American Experiences, and Racial Exceptionalism

"Lisa Wool-Rim Sjöblom has quietly conveyed the maddening, meandering path that a transracial, immigrant adoptee must take in order to discover her own history. She detangles lies, bureaucracy, and the unwillingness of others, even as she unravels questions of her own identity: what does it mean to be a mother? To be Swedish? To be Korean?"—Hellen Jo, cartoonist, and translator of Uncomfortably Happily

"Sjöblom offers a searing first person account of her journey. Thoughtfully told and beautifully illustrated, her memoir is sure to resonate with many readers. Palimpsest provides an important voice."—Elizabeth Raleigh, author of Selling Transracial Adoption: Families, Markets, and the Color Line

"Palimpsest is not only a dramatic and riveting story of a Korean adoptee’s search for her origins. It is also a window onto the abuses that are all too common in transnational adoption, and too often glossed over as insignificant. Through beautiful images and compelling prose, Sjöblom captures how adoption entails the systematic erasure and rewriting of names, relations, and cultural belonging, and thereby brings into powerful focus the indelible psychic traces that remain."—Eleana Kim, author of Adopted Territory: Transnational Korean Adoptees and the Politics of Belonging

Sjöblom’s beautifully crafted graphic novel about being a transnational adoptee of color in Sweden is not just pioneering but also functions as a powerful reparative act. Palimpsest highlights previously subjugated and silenced experiences that might appear to be uncomfortable but nonetheless have to be told to accomplish truth and reconciliation for all partners involved in adoption. Through Palimpsest, Sjöblom helps to break the taboo in Sweden surrounding the all-too-numerous corrupt adoptions."—Tobias Hübinette, PhD in Korean studies and a critical race studies researcher, Karlstad University

With help from her husband and a Korean-raised friend, she begins an investigation into her origins that reveals the dark history of foreign adoption . . . The participating institutions, meanwhile, do their best to dismiss, obfuscate, and gaslight Sjöblom as she investigates. An unflinching indictment of foreign adoption."—Publishers Weekly

Lisa Wool-Rim Sjöblom is an illustrator, a cartoonist, and a graphic designer living in Auckland, New Zealand, with her partner and two children. She has a master’s degree in literature from Södertörn University and has studied at the Comic Art School in Malmö. Palimpsest is her first graphic novel. She is an adoptee rights activist.