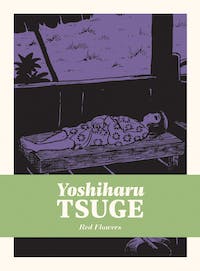 Yoshiharu Tsuge leaves early genre trappings behind, taking a light, humorous approach in these stories based on his own travels. Red Flowers ranges from deep character studies to personal reflections to ensemble comedies set in the hotels and bathhouses of rural Japan. There are irascible old men, drunken gangsters, reflective psychiatric-hospital escapees, and mysterious dogs. Tsuge’s stories are mischievous and tender even as they explore complex relationships and heartache. It’s a world of extreme poverty, tradition, secret fishing holes, and top-dollar koi farming.

The title story highlights the nuance and empathy that made Tsuge’s work stand out from that of his peers. A nameless traveler comes across a young girl running an inn. While showing the traveler where the best fishing hole is, a bratty schoolmate reveals the girl must run the business because her alcoholic father is incapable. At the story’s end, the traveler witnesses an unusual act of kindness from the boy as the girl suffers her first menstrual cramps—and a simple travelogue takes on unexpected depth.

Red Flowers affirms why Tsuge went on to become one of the most important cartoonists in Japan. These vital comics inspired a wealth of fictionalized memoir from his peers and a desire within the postwar generation to document and understand the diversity of their country’s culture.

“A revered creator of gegika manga [who works] in a style both spare and lush."—The New York Times Book Review

“Fascinating . . . one of Japan’s most celebrated and reclusive artists.”—The Guardian

"It’s easy to declare that this series, and Tsuge’s work, is fantastic."—Manga Bookshelf

"Reading Red Flowers gives a feeling of following Tsuge on his travels, an early example that comics can evoke as much as any form of literature."—BlogCritics

"[Red Flowers is] a strong contender for the best book you could read this year, and it doesn’t really matter which year you happen to pick it up."—SOLRAD

"Quirky . . . a must-read for collectors [that] proves accessible and fun for manga newcomers as well."—Publishers Weekly

Yoshiharu Tsuge; Translated from the Japanese by Ryan Holmberg

Yoshiharu Tsuge was born in Tokyo in 1937. Influenced by the realistic and gritty rental manga of Yoshihiro Tatsumi, he began making his own comics. He was also briefly recruited to assist Shigeru Mizuki in the 1960s. In 1968, working for Garo magazine, Tsuge published the groundbreaking story “Neji-shiki” (commonly called “Screw Style” by Western readers), which established Tsuge as an influential manga-ka and a cultural touchstone in the changing Japanese art world. He is considered the originator and greatest practitioner of the “I-novel” method of comics-making. In 2005, Tsuge was nominated for the Best Album Award at Angoulême International and in 2017 won the Japan Cartoonists Association Grand Award.